So, Illfonic on Twitter said “Post it here and we’ll send it our Q&A Team”. I was in contact with their Community Manager Charles Bathel for months now with absolutely no resolution. Upon this one Illfonic Tweet, I found someone who is having a similar issue as me (only it’s the City Hunter Predator).

So, let’s track this back :

Ever since I got this game and started playing this game, I noticed an issue with the Predator Class Customization / Loadout. I used the '87 Predator Class, added (for example) the Combistick and Netgun. Save, play, close the game. I boot it up again, and at the Main Predator / Fireteam Customization Screen, it’ll still show the weapons I had selected previously on that character. However after going into the Custom Class Loadouts, (in this case Loadout Slot 1) it’ll be completely missing. Everything from weapons to gear (IE Audio Decoy, Wrist Launcher) gets reset. And now, instead of being completely blank, when the bug resets this, it’ll have the Elder Sword in place. Yet even if I back out and close the game, then go back in, It’ll still shoe the previously equipped weapons (IE / in this case Combistick and Netgun). This seems to happen to any slot too. It was initially only tied to this '87 Predator Class. However there was one instance where it started messing with ALL classes…even paid DLC Packs. Basic Predator Hunter Class, City Hunter Class, Samurai Predator Class, etc ect. I even have just met someone on Twitter who have had this similar issue as well just with the City Hunter Predator Class.

Now I’ve done literally everything with this game on PS4, even going above and beyond what this CM guy asked. I’ve Restored Licenses, Deleted Local and Cloud Save Data, Moved To Different Locations (Two Different EHDD s, and Internal Storage), Deleting and Re-downloading the game. I’ve done everything I can imaginable aside from Initializing The System. And I’m not gonna do that unless I absolutely know that’s what it needs. But since Illfonic doesn’t seem to know, as this Charles has said he’s talked to the Dev Team and they couldn’t recreate this scenario ; I’m not going to (basically) Restore my PS4 's File System, deleting everything and having to re-download it. Also note, at one point it ended up “infecting” and bugging out the other Classes / Slots.

I’ll attach several pictures to show and prove this is an issue. Some will be the '87 Predator before closing / then after. (X) Predator Class Before / After, and even showing the '87 Predator Class at the Main Customization Options Screen…which’ll show that (even after closing the game) it’ll show the previously equipped weapon, yet going into the Custom Class Loadout, it’s gone.

Also this is an issue ONLY with Predators, no Fireteam Custom Loadouts…yet.

Also note, I didn’t notice this until now, so I cannot say if this is a new thing or not. However on the PS4 every game has something called “System Exclusive Data”. Predator Hunting Grounds doesn’t have this. I’m no master programmer (even in PC let alone console) but I say that’s odd. As every other game has this.

Apparently I can only put one pic in, so I’ll put the one showing my Predator after closing the game then starting it back up and going in. 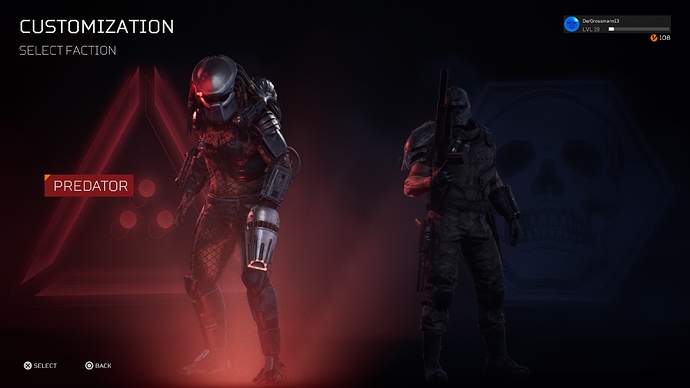