Well, I said it many times. I would LOVE to be wrong about this film. And I’m very happy to report I mostly was. That was a good movie. Better than Predators and 2018 Autism-hunter, but only half as good as the OG and a little behind P2. My only real issue was the ending with Ferals actual death. Seems like he would’ve/should’ve ducked. But he DID have some brain damage from a .45-.50 caliber musket ball lodged in his brain. I like his design. I like that he was basically feral, quite primal and a fighter. I liked his toys a lot. I like that he didn’t have the plasma caster. I love the mask. I like the cloak, but don’t understand how it worked in the water. Perhaps a different, older model of cloaking device that was less effective. Perhaps that’s the trade off of the more modern ones… more effective, but not in water. Or perhaps it’s a different clan altogether with different stuff. Who knows? Only Danny boy Trachtenberg.

Now I remember Amber Midthunder. She was in Longmire a couple of times. I like her. Naru IS a bratty turd, but she DOES train and practice her skill set and her brother (who should beef up and play Turok. Just saying…) training her on the DL helped sell it. Fortunately everything made sense at the end, how she saw the spears going to where the red dots went, etc. Saw Feral doing Predkour. All the things. And they made sure to explain that the medicinal plants lower your body temperature. Now, she doesn’t know he sees through heat, she just saw that Andolini ate them and wasn’t seen at first, so she did the same. And she didn’t overpower him, thank Science. I do wish the sequel teaser at the end would’ve been longer, but whatever.

I hope it gets a sequel with Elder slaughtering them all and taking the pistol. It’s only right and fair.

The CG needed some tlc, but its a Hulu movie, I get it, money’s tight. Hopefully it’s a success and they keep going. I still think a better ending would’ve been Naru dying and Feral taking the flintlock and presenting it to Elder, or maybe losing it in a fight with Elder, but I’ll take an 85% good movie with a few flaws over the last 2 movies and the AvPs any day.

Heck, the opening was stunning, honestly. I hope they give ol Danny boy a crack at Turok in live action as a series.

Hopefully the Feral action figure is well into production.

Final note… I laughed at how normal the Comanche were vs how filthy, gross and savage the French were portrayed. Humorous. 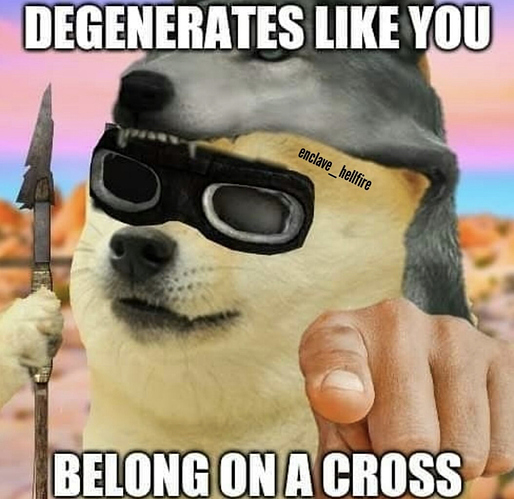 I would also give it an 8.5. I gave it another .5 points after I learned there was a Comanche dub.

I laughed at how normal the Comanche were vs how filthy, gross & savage the French were

Accurate to real life TBF, the only good the French have given us is Jean Reno.

TBF, the only good the French have given us is Jean Reno.

That sounds like a very expensive but not at all good kind of Cheese.

Mr Depardieu is in fact a connoisseur of cheese, as well as a master thespian.

Lol agreed. It’s funny how noble the Natives were vs how debased “whitey” was. Pure popoycock. I’m pretty sure everyone from that time smelled to high heaven and looked reasonably gross. Especially considering there wasn’t toilet paper 😆

I STILL think that every Pred in every sequel has been less dangerous, less skilled (Wolf excluded cuz it’s AvP, not just a Pred film) therefore the humans have been less worthy Prey. And that’s true here too. The thing that makes it passable is that Naru KNOWS and ADMITS it. She knows she wasn’t worth the effort, so she basically angers Feral into pursuing her by shooting him in the head and stealing his mask. I suspect Feral still didn’t consider her “worthy” prey until he lost his arm. The look he gives her and his severed arm reeks of, “ok, you got me there. Now I’m gonna fuck you up.”

Actually you’d be surprised how historically people have never really been “unclean” like you think they would. Like the mental image of a Medieval Peasant being covered in dirt & grime, that doesn’t really happen. As far back as Rome & Ancient Greece people had hygiene practices & applied fragrances.

Just know that historically people weren’t going around like animals until magically in the 1900s we started being all clean & proper. Simply because it’s a basic survival instinct to keep on top of yourself, being unclean tends to ya know, turn potential mates away & makes you a bed of disease which is just bad for your own health: not to even go into how we now know that poor hygiene can worsen your mental state & lead to depression.

Of course our standards today are higher than ever, but we were never barn yard animals. It’s why we’re the apex lifeform.

Theyd do the “pta” bathing until they could fully clean themselves🤣

Final note… I laughed at how normal the Comanche were vs how filthy, gross and savage the French were portrayed. Humorous.

The Comanche were at home. They respect nature so you’d possibly extent the to be clean. The French were on the mission in a foreign land. Makeshift camps are filthy and you just make due with what you have.

My favorite part was when Senator Armstrong showed up, shouted “Nanomachines, son!” and broke the predator in two with his bare hands. He played college ball, ya know, he’s not one of those beltway pansies. Could’ve gone pro if he hadn’t joined the navy.

All to a point. No soap, no Charmin, no old spice, lots of smells and chafing is inevitable. Plus don’t sit there and tell me it wasn’t a small middle finger because there’s at least one of those in everything today. I don’t really mind, I found it amusing mostly because I detest France and enjoy Native American culture, but its just a little silly.

Hopefully the Feral action figure is well into production.

I hope to God that Hot Toys is planning a 1:6 scale of both - Feral and Naru

I think it’s the second best (after P2, I think P2 is the best Predator movie ever made).
I actually didn’t really like his design that much, but that’s just me, that’s not objective and I don’t really like the design of JH’s mask that much, so take my hashtag opinion with a grain of salt
But overall a very decent film.

I guess they’d rather it be the French than the Brits.

Heck, the opening was stunning, honestly. I hope they give ol Danny boy a crack at Turok in live action as a series.

I’m so glad I’m not the only one who wants Turok to make a comeback!