Will they cut half the game and pair it with an unwanted side project like Resistance and Reverse?

Will they make it from scratch or reuse sets from RE8?

Will they keep, add, or cut enemies?

Will Luis remain a perverted nice-guy or get the Carlos treatment?

Will Leon look older than 15?

Will they remake the additional content or cut it?

Cuts. I think the game is popular enough to sell just as well. Even if reviews would be average.

It’s s brand thing tho, so maybe they won’t risk it.

I wonder what sales data told them about cuts. Perhaps the game was rushed. Not the same as cutting corners, i guess.

They’re not gonna cut any levels or setpieces from RE4 it’d be commercial suicide. At most I see them heavily altering the Island portion of the game as everyone is in agreement the Island is the weakest part and could do with reworks. Even an almost perfect game has flaws, the Island was one

Assets are always re-used in games even if you don’t know it, Yakuza is still using animations from the PS2 for example, Elden Ring uses a lot of assets from the Souls series too. There is nothing inherently wrong with Asset re-use, it comes down to execution & the vast majority of Asset re-use happens in a way you don’t even recognize it.

We can’t tell at this stage, hopefully no enemy types will be cut, they’re all iconic. Won’t be opposed to a new one here or there, something to keep Veterans on our toes.

We can’t tell at this stage, hopefully ALL characters remain the exact same. Sadly we know Ada’s default outfit has been changed, I can only hope the iconic Dress is a bonus like Jill’s original RE3 outfit was.

The Leon model does look altered from what we have seen, particurly the hair, and also Ada appears to have a new face model closer to her original RE4 self so I think Leon will be aged up too.

I fucking hope they keep Ada’s campaign and actually work to expand it, I don’t see Assignment Ada making it, I HOPE Mercenaries remains. It’d be very weird to cut Mercenaries from RE4.

My biggest concern at the moment is that they’re going to make RE4 too dark, lessen the cheese. IMHO this is the first REmake I’m not fully onboard with. RE1make is possibly the BEST Survival Horror game ever made. RE2make made me like 2, heresy I know to not like the original but hey I just never vibed with OG RE2. RE3make whilst heavily altered from the original game, which i also loved, was still a game I really enjoyed & I’ve played and beaten it 5 times so far.

But I don’t think RE4 needs a Remake like 1, 2 & 3 did. Ideally, RE4make would be like the Halo Anniversary games, the original game with a fresh coat of paint & nothing else. RE4 was lightning in a bottle. No RE game since 4 has been as good as it. It’s just the nature of things, I mean the game made the 3rd Person Shooter as you know it today. It is a work of art that quite literally redefined game design at the time.

I think it is a fool’s errand to try and capture that lightning again, I mean they couldn’t even do it with 5 or 6, and certainly not 7 either. Even 8 just isn’t as good. So I can understand why they’d wanna do things differently here & there, better to try some new things then fail at recreating the old, but ultimately whilst I am still gonna buy the RE4make and I think it will be a great game in its own right, I’m not AS hyped as I was for RE2make & RE3make because I know if they fuck it up in even the smallest way, they’ll never live it down. Hopefully the Devs know this too and are working to avoid that.

In the mean time, I’ve sent my right hand to entertain you.

I’m honestly a bit worried about what they’re gonna do for RE4. RE2 Remake was fantastic. RE3… eeeh, it was okay, but not as good as 2. I hope they do better with RE4, but I don’t know.

After RE3 I’m sure they’ll be cutting some things out. There’s definitely enemies that didn’t make it into RE2 either, and I was super bummed the iconic gun shop scene was altered to some lame dramatic break in pace before the sewers instead of being the introduction to the game.

I’m also gonna bet that the extra modes like mercenaries, separate ways, and assignment ada aren’t going to make it. RE2 was their best remake because they didn’t cut the OG extra modes like hunk and tofu, but expanded on them with ghost survivors and like 4 other tofus, which was actually pretty hilarious to play considering even on the English language setting, they were yelling in Japanese with a random metal track playing in the background. Mercenaries was introduced in 3 and they still cut it from the remake.

Also, using elden ring is not a great example of reusing assets being fine, after a few hundred hours and the hype wearing off, it was a pretty lazy game by FS which is surprising cuz they’re known for their attention to detail, yet they just reused all these bosses and that was a major disappointment.

I’m more cautious than hyped for it after RE3, that was a slap in the face cutting half the game, largely cutting nemesis, then throwing in some bs new game no one wanted to pay for. 3 was fun, it wasn’t a bad game but it was definitely not what it shoulda been.

RE4 was the original that got me into that franchise, then everything afterwards was icing on the cake. They can’t go wrong with RE4 remake and I think everything was redone shot for shot just with different models, different Voice actors.

yeah, i wonder if they will retool the many look-a like zombies in that one. If they use the same old fat european Ganados dude with the mustache that would be funny. 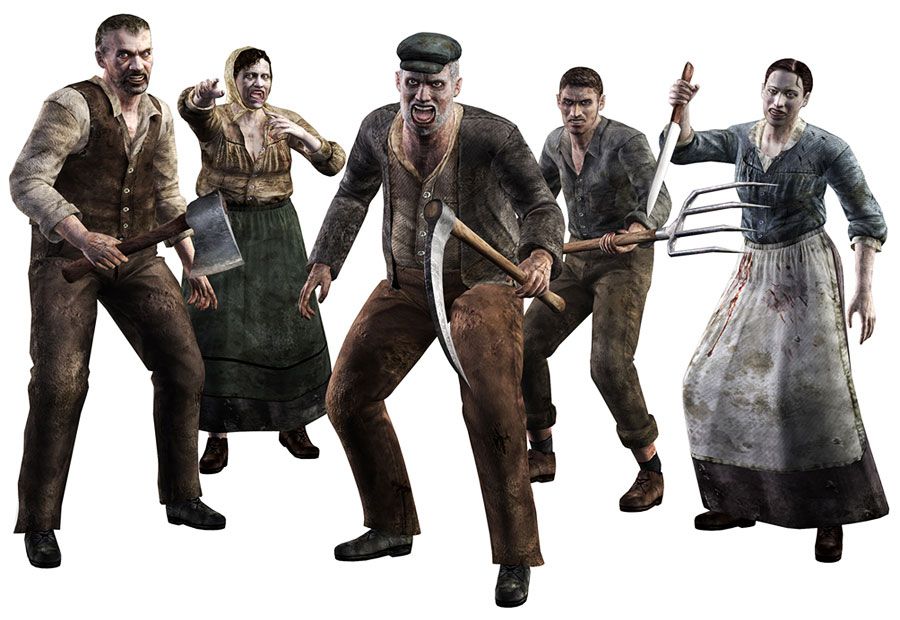 It was like the same three guys but it was terrifying as hell. I also liked the cultist Ganados. They looked freaky with no hair.

I will definitely see if this remake is worth it.

This asset swap game was so finished that the only soundtrack in the whole game was Hunk’s theme.

…its never releasing is it?

I never got to play it, tried downloading the beta demo but it never actually let me in lol