I love the Samurai in design and idea. It just sounds awesome, these ancient feudal lords fighting this mighty and unholy “Yokai” with unfathomable sword skill. But I have one complaint and one complaint alone. I honestly dislike all of the armor shades. There is a running theme with all of my Hunters and Huntresses; I use only the bronze or vanadium shaders cuz they’re cool as hell to me. So I was thinking that the Samurai has all these shaders save for all the base ones; grey to olive I think. @Courier Was gonna bring this up to guys but I assume you already were thinking about it but in a future update, the one for this month the or maybe a later one, could you guys grant the Samurai all the other armor shaders? If that’s possible and isn’t a big problem for you guys.

I would love to use a standard grey Samurai or especially a bronze Samurai cuz the thought of this ancient, withered, rustic Ronin space warrior sounds fucking awesome.😅 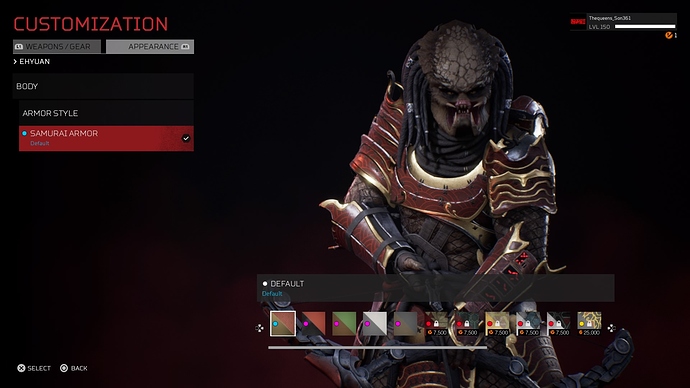