Does anyone else play? I freaking LOVE IT!

I love the leveling up process of each different Marine. The customization for the Marines and weaponry is perfect along with the variety of each class and the different abilities that coincide with them!

The story line is also incredible and makes for an outstanding replay experience! The A.I. is also amazing!!! The way the Xenomorphs move, scurry and slide into stuff while the chaos ensues makes for an extremely immersive experience!

Anyone else spend time on the UAS Endeavor?

Oh and by the way…

We already have a roadmap over there. 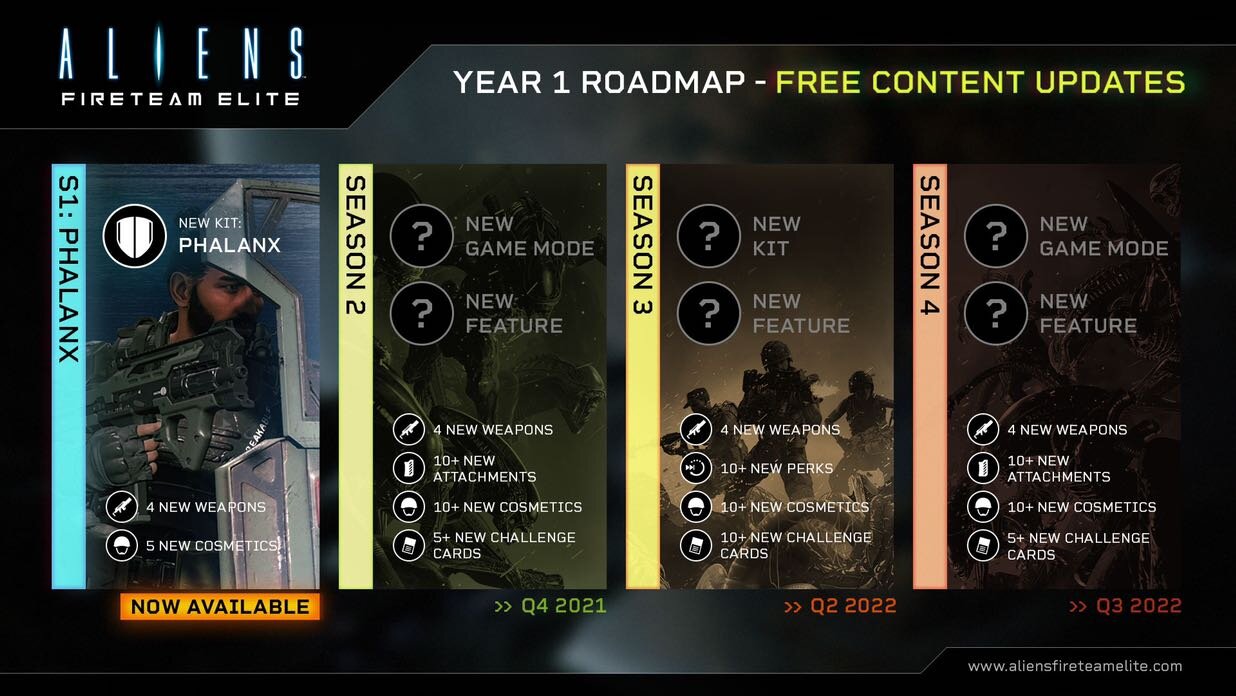 That was a game for 2.weeks and that’s it…

That game died
There was a update scheduled for October and it’s now December.
Plus it’s a hoard shooter

This is info from people I know that used to play the game.

The next update is scheduled for the forth quarter of 2021. Which means October, November or December.

I remember it existing for 2 weeks

No one believed me when I said it was basically DOA

I actually liked the game for the period of time when A) levelling up and B) when it worked.

Fox studios sure know how to shit the bed when it comes to promise and possibilities.

Its still a solid game no matter when you play it. I still try to play it when i have time and when there are players found on steam. Just be careful when because its up and down. usually on weekends its good or following or on a holiday.
PLaying alone with bots or not as cool, but playing with at least one live player is great!

And always change your weapons to something random. I find it cooler to try something new because a meta is a meta even if its a gun.

There is still a little satifaction killing aliens. they should increase that by adding more types of aliens or types of alien deaths.

I love it dude. I’d eventually like to get a consistent team to complete the insane missions.

If you ever wanna play sometime, my PSN is moosemike7.

no cross play. which is strange for a game like this.
I dig your latest video btw!

More solid and less Bugg than this game, but it becomes repetitive when you’ve beaten all the difficulties and have unlocked everything we know of.

I hate to be an ass, but you’re later to the party than you think. Game has less than 300 daily players on Steam, and it launched in the top 10 bestselling games in Europe. It released earlier this year in August. It died back in early October. Most of us have the game 100% or very close to 100% by now

So how does that have anything to do with me?

The whole, “I’ve been here since launch” attitude is ridiculous. I guess y’all who have that attitude about PHG also have it with AFE?
It means nothing. You realize that right?

Absolutely! It’s an incredible game and loads of fun!

I would team up sometime if you needed another player 👍🏻

Thanks brother! Never use the minigun much but it was nice to have a new pred give me some decent footage lol. I wish it were more viable because it’s a lot of fun lol

If you’re too naive to understand how it concerns you, and potentially everyone who picks up the game around now, then you have no business arguing.

Lemme lay it out for ya, real simple like

We’ve been here since launch, for some reason that upsets you.
We’ve got double, triple your hours. We’ve been playing longer. We know more about the game than you and have experienced all it has to offer.

Starting to see a pattern?

Take them as reviews, for the situation’s sake, does your opinion change?
Both games get boring, being neglected by their devs and starving their community, effectively killing their game. Then people like you come along, pick it up for the first time, and praise the devs for being sloppy. You may be experiencing it for the first time, and that’s good for you, but that’s like coming into possession of a banana peel. It’s already been used, had its fun, been played with, eaten. It may be good for you, but the rest of us are still starving. And you praising the fruitless tree it came from isn’t helping anyone, including your long-term experience in either game.

Notably, you haven’t even scratched the surface of endgame in either game, judging from your opinions based on your experiences. AFE is still quite buggy, Insane is still impossible to do without exploiting or getting extremely lucky, the replayability doesn’t exist after you complete the campaign a couple times, and the game is dead. You cannot do Extreme with bots, Intense gets difficult enough solo when you’re playing on the later missions. I’ve beaten it alone on Intense and I’ll tell you it’s pretty fuckin’ hard to do alone. Couple of my buddies have given up on 100% because it’s not achievable, or they just don’t want to spend weeks on weeks doing the same level over and over again to finally beat Insane by a thread’s stroke of luck. Listen to me when I tell you, you will not beat them without getting lucky or exploiting.

You’ve heard our accounts of PHG’s endgame, and yet you still drone on about how you belligerently believe JH will become a purchasable DLC. Belligerent means eager to go to war, in case you don’t know, so we can come to a better understanding. You quite clearly are attempting to instigate a rowdy response with your comments about us telling you JH is and will remain a pre-order exclusive. Furthermore, you’ve conveyed your opinion about the game’s sandbox several times, and your opinion aligns perfectly with someone who has less than 1000 hours in the game, hell I’d say even 500. Which, for argument’s sake, is like a toddler saying they don’t like the rules of Checkers because they don’t fully understand how it works. Now, I’m not calling you a toddler, I’m simply using that example as an analogy. What you’ve said previously has already been said dozens of times on this forum and has either caused an improper balance in the sandbox or rightfully fallen on deaf ears.

You are not the first flashy new guy that praises Illfonic’s mistakes and you definitely won’t be the last. So, please, break the chain. Let some other poor sap come along and get enthralled by this sinkhole.

To clarify, I’m not asking you to stop playing the game. I still play both AFE and PHG, but I am asking you to cut the whole hype train thing. There’s nothing hype about either game once you get into the nitty gritty. Same thing’s happening on Halo Infinite. I think it’s a fuckin blast to play, but in the long run, the microtransactions, weapon sandbox, and multiplayer system is flawed and requires dev attention. Let’s just you and me hope that our devs wake the fuck up and fix their mistakes.

Have we come to a mutual understanding?

Again… your opinion on the game is just that, an opinion. Sucks you no longer enjoy AFE or even PHG, but that doesn’t mean anything.

You don’t enjoy either game, however my friends and I do. Maybe you’ve moved on, ok cool. So what.

Sounds to me like it became too challenging for you and your friends so you put it down. And that’s fine too, not everyone can beat every game.

But your opinion is not fact based, it’s a bias opinion on a game too difficult for you and your friends to complete, which is ultimately why you left it.
Don’t get upset about it.

Months from now when the Jungle Hunter DLC comes out we will look back on this and laugh. 👍🏻

I rest my case…