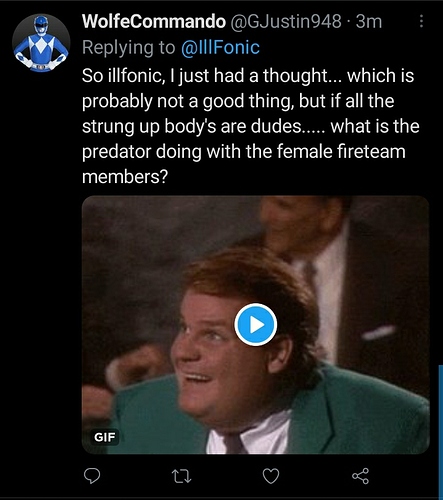 How many private military contractors/black market dealers do you know of that are women? Also there’s no women in the special forces.

Also there’s no women in the special forces.

Barrier Falls As a Woman Becomes A Green Beret.

The demon that makes trophies of men.

He just let’s them runaway, thinking they mistook the jungle for a kitchen 😁

Stargazer doesn’t look to have any women on the payroll. Complete sausage-fest.

It’s not like there’s only a single example though.

The Fireteam in the original movie is not just all special forces though, they are mostly mercenaries, a mix of former special operations and CIA. FairYautja already pointed out that there is now at least 1 woman member of special forces, but there have been members of special operations for longer. Special Forces only refers to members of the Green Berets, Special operations is all units that fall under SOCOM, green berets, night stalkers, rangers, seals (and formerly UDT), marine recon, airforce PJs, etc. of which there are already hundreds and will be hundreds more by 2025. but more importantly, who care?

I know what special forces is lol. It’s extremely hyperbolic to say there’s a lot of women in special forces. Like. Absurdly hyperbolic. But you’re right, I don’t care. Was just pointing out that using a single person as an example is what’s called, anecdotal lol

Also in the OG movie they aren’t mercenaries??? Wat lol they literally call them by there ranks and are under military orders lol

I always assumed they were the bodies of the guerillas / Stargazer operatives. Otherwise the fireteam would be going in on a recovery mission, right?

None of the FT members are able to be strung up

It won’t happen though

They are mercenaries, or at least a semi-autonomous unit (although I doubt such a thing exists). Dutch explicitly talks with Dillon about missions that he’s turned down, which doesn’t happen if you’re rank and file soldier.

Dillon also says to Dutch that “You’re still under orders, Major” after the raid on the guerrilla camp, which means that he wouldn’t be once the op was concluded.

You can turn down missions. A major (incase you aren’t aware) is pretty high up there. My buddy in the marines ain’t even high up at all and he straight up tells people no all the time when they ask his unit or whatever to do dumb shit.

They are 100% not mercenaries. They are a special unit called in to do this particular job. Hence they are all addressed by there military titles

“Why did you say that twice?”