As I’m playing the game I noticed a lot of stabs at Batman,

I will continue to write more when I stumble upon them, if you have more theories like I do that DC is trying to get rid of Batman please look at these points that they are, I dunno if it’s because he’s a male or white but whatever woke agenda, they destroyed my childhood 😔

lol there was no need to include race in this statement but his logic is that we should let powerless dregs run society instead? We’re assuming people who have never tasted power before are more incorruptible than people who are already wealthy? It’s the poorer people who take bribes. It’s not wealth that corrupts, it’s greed.

Which in my opinion proved my theory in Gotham Future State, that the real reason why Lucius Fox didn’t help Bruce Wayne wasn’t because he didn’t want his identity to be found out as Batman but because he rather help his son the new “Black Man” as you can tell

Oh come on I love your comments please tell me what you think? Am I wrong or am I just upset? 😔

Assuming you didn’t misrepresent the game, intentionally or misintentionally, I don’t disagree

Batman armor is just ugly. And if everyone else has actual armor why not Batman? I’ll admit this is very much a nitpick but a fair one non the less

It true just look it up on YouTube, someone probably put one up by now

Well the premise that they took sounds shittyy… IMHO I think there is a big stale mate of corporate money coming that they want specific entities being apart of DC game universes (since its being pretty pale in coparison to the Marvel game universe). But maybe this is just the way the business is playing out.
I think they aren’t getting enough to make DC a prominent marketplace but really paying for the help to create it. I just don’t understand why there is such a huge different the popular talent involved.
Both company’s are paying good money to make their properties shine. But they are polishing it in different ways.

At the end of the day, they are all limited to budget. right?

To put it into perspective, it’s the difference between a title like GOW and Resident Evil vs Spiderman and RDR2 or something. The emphasize details in some areas in some games and not in others. Maybe its just the focus on the aspects of mechanics vs details in content delivered.

THIS GAME IS WOKE?! GAY PRIDE PARADE EMAILS AND FEMALE ARTIST WHO IS BLACK AND MARRIED, CALLING HER PARTER WIFE, BY EMPHASIZING SHE SAYS IT ALOT, WHO IS PART OF SOME MADE UP GROUP THAT HELPS BATMAN IN SOME KIND OF DIVERSITY NIGHT WATCH?! Ugh I can’t believe I spent money on this garbage! ITS SO DAMN POLITICAL! ALSO HUGE SPOILERS THEY MADE THE PERSON IN CHARGE OF THE OWLS RELATED TO BATMAN! WHO BASICALLY SAID THEY KNEW ABOUT HIM AND COULD HAVE TAKEN HIM OUT ANYTIME BUT INSTEAD PROTECTED HIM, SO THATS LIKE SAYING BATMAN GOT AWAY WITH BEING A VIGILANTE BECAUSE THEY DIDNT CALL THE POLICE ON HIM AND PROBABLY BRIBED THE COPS, HOW STUPID! 😡

I finally get why they made this game, listening to the recordings and going through the story, they portray Batman as a failure and that his sidekicks are better then him and why they deserve to protect Gotham! This is horrible first in TV shows Batman is arrested and Harley Joins the Batfamily, Batman in comics loses his mantle in fear state and then leaves Gotham…I can’t believe they hate Batman so much! 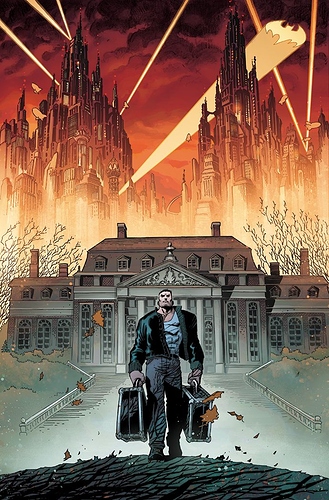 Would you rather have an adam west type dude wear a leatard and remake the 70s batman?
Its either this or nothin.

At the end of the day, they are all limited to budget. right?

You’re forgetting that talent is a massive factor and a lot of the old guard (that learned in-house engines and passed knowledge down) has left the industry to make way for the legions of easily replaced copypaste scrubs that went to a degree mill to pump out broken UE/Unity games and will work for pennies.

We’re just feeling the effects of all those kids that grew up saying they wanted to be game developers and collectively destroyed the industry after Art School spit them out. Same is happening with film but games are worse because its a numbers/crunch game where companies can easily replace people since they’re all taught the same codemonkey basics.

Its like, its certain that celebritism can affect the long term costs…thats probably why for the most part that few actors will return to franchise games unless their salary demand is reputable.

Henry Caville called it quits 3 seasons into Witcher and passed the torch with no compromise.

Its evident that talent know their worth, but to drag on contract demands for their own entourage would be down right greedy unless they have something to offer.

This is where talent like big names like Tom Cruise or Brad Pitt would offer their own studios to be involved with productions. but Unknown people would probably just have to be left in the dust, leave after one title.

I wouldn’t doubt that Kevin Conroy would have his own network of people, but he has to call it a day too. We see it here. He’s not in every batman title. Thats healthy.

I’ll say that Gotham Knights would be the Assassins Creed : Oddesy of titles in the DC gaming verse. Highly forgetable and convoluted but not a total loss. Just one of many titles in the entertainment machinery.
I’m surprised that we even see it made, but i tell you we won’t see Batman in anything cool in the next 2 years.

Its evident that talent know their worth

Big name actors can pretty much do anything they want because their name sells.

No one knows individual game devs unless its an indie title, like we don’t know the name of the guy who was team lead in charge of the lighting in RDR2 (which probably included 100 other people). We just know the name of a giant company and probably the name of a CEO.
And then the company can fire everyone at will and hire people who’ll work for cheap after paycuts and we won’t know the change in team/quality until the game is out. Only the company name matters, and even then it doesn’t. Look at EA.

And then the company can fire

Lets be honest, the term fire negates civil rights. Its not right to use the term in a avery very very highly sought after skillset that is the CGI industry.
When you do it as a business entity, then they can cut contracts.

good. Fire usually is indicative of less than proper wages…like minimum wage incomes.
People fire people all the time on these wages and they don’t care about income loss or employment insurance. Its not even in the realm.

When you do work in games and entertainment…you don’t get fired.

When money comes out of a fucking large studio company and distribution outlet or Warner bros…nobody fires anybody. Its like saying…Zeus had the power of the gods…but we killed him because Prometheus was more powerful.

You don’t go to the Corner store and ask the manager about the architect they hired and fired.
“IT Architect Danny ($100,000 salary ) got fired because his Convenience Store boss didn’t like his attitude towards Nacho Dip.”

The range in pay between someone working at Rockstar and someone working on a mobile port may as well be. When everyone’s willing to work for the same pay at the lowest bracket they become expendable.

And you have 0 name recognition. No one cares about Johnny who spent months trying to touch up grass or increase the polys on a door. You’re on a team of interchangeable people unless you’re a lead engineer.