How to fix the no fire bug for FT (MACRO ALERT)

I use X-Mouse Button Control, but you can use any other macro software such as Razer Synapse or if your mouse has a proprietary macro software

Free utility to customize your mouse 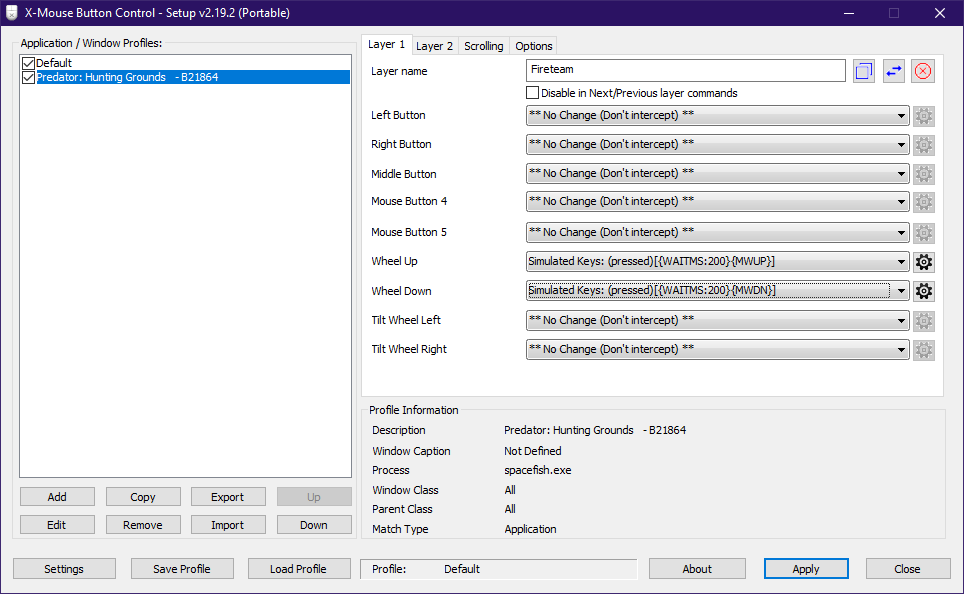 Basically, introduce a delay between when you press the key and when the key is actually activated. This prevents the simultaneous or almost simultaneous pressing of both Melee and Weapon Switch keys, which is what triggers the bug.

I honestly want to do this, and even though I’ve said to you this kind of macro is okay to me…I think it’d be hypocritical of me to do this. So I will continue to suffer the indignity of zerker combistick deaths

i disable the mouse scroll wheel up and down altogether because i use side mouse buttons. But i still have Mouse Wheel button click as an option. Usually works for me to stop weapons changing.

Whatever works for everyone. My workflow is that I use jump/interact and reload with my side buttons, and I only have two.

I just ordered an 11 button mouse (wheel has side scrolling and I have two additional left click buttons, my current mouse doesn’t have side scrolling) so let’s see how I adapt. But using the scroll wheel to swap weapons is kinda natural for me since that’s how all games do it since like, decades ago

Why would it be hypocritical?

Because of my often stated stance on macros?

well if we get technical, this isn’t really a macro, as macros are defined as “a sequence of inputs” and there’s really no sequence here, is just one input, timed.

Normally I’d meme some Palps quote here, but it’s just kinda sad that the community finds work arounds and bug fixes way before the devs even acknowledge it.

People be cheating in relationships and taxes, but think using macros in a video game is wrong lmaooooo…

Macros that bend the mechanics of the game that allow you to do things people cannot do on a similar playing field, is cheating.

Macros that go above the mechanics of the game to simply stop a bug from occurring, with no added advantage to gameplay, isn’t. (Good on them for utilizing a macro to fix an issue, instead of bending the game to a players will)

Think this is where a ton of people’s stances are and people need to stop blurring this line and actually point out people that want to ruin the game just so they can win, or are genuinelly good at playing the game with no assists needed.

Yeah plus when the government earns my paycheck then they can take as much as they want.

Gimmie this “price for a civilized society” argument? I want my money back for the past 3 years!

Bro, let’s go play some privates both as FT and I will show you I don’t need to use the net macro to be good and I guarantee I will outplay you in every match. How the hell does the net macro help my sniping or shooting in general? Please explain.

macros dont help you but you use them , sure

I have no desire to do that.

Nor am I looking to see who’s better.

Cheating the creation of life as intended, yes lol

I literally just mention how macros that break the game aren’t cool.

Even said that this usage of a macro makes sense and eliminates a bug in the game.

Then I am expected to prove myself in private matches.

ohh so one is ok ? so if i use 1 cheat that auto kills everyone in a map its ok because its one , good to know