How would YOU reboot the Predator franchise?

I’d ditch all established lore, and keep the Predator totally mysterious. Yes, he skins you and collects your skull, sometimes spine attached. Why? Dunno. Where does he come from? Dunno. What’s he doing? Hunting humans. Why? Dunno.

I would totally watch a movie like this, sounds awesome

You took the words right out of my mouth. 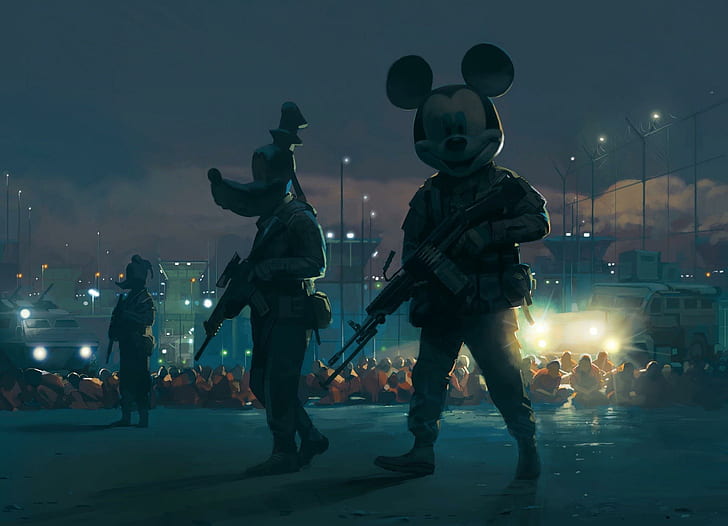 I would reboot it as a cross over with the greatest sequel in history… world war 2.

I’d like to see a Predator behind holodomor, and history just plays it off as a famine when it was some space guy goin nuts murdering peasants.

I wouldn’t reboot continuity but tone would go from action horror to more horror.

It would basically be a trilogy on the same hunt. Three Predators but ideally each one would be killed in their own film. The basic idea goes that group of poachers show up on Earth with it getting the attention of an Enforcer. The OWLF show up late since the poachers are acting out of season.

However the viewpoint is from a civilians POV. We haven’t seen that in a Predator movie. Basically you’d be seeing the events of a hunt and what the OWLF are actually doing to cover up a Predator encounter. What I’ve worked on is that you wouldn’t even know it’s a Predator movie up until you start to see elements of the Predator franchise like the OWLF. But the main character isn’t like Dutch or even Harrigan. It’d be a story about revenge but he’s just some guy. Not even a blip on the Predator’s radar which is what enables them to get close to the action since Predators wouldn’t think some guy would be out to get them as much as the enforcer or the OWLF.

Damn. I could definitely see a great trilogy there. Love it.

And I agree that scrapping all the lore is unnecessary. The Predator is basically the only one that tried by introducing new motivations, and we mostly all agree it was terrible and worthy of being ignored.

I dunno how you can go straight horror with a character like the Predator though. I think there’s good places to go with the established Canon but… I mean at least no one in Hollywood wants to go there. Good ideas.

I would probably make an expansion of other times in history when man has faced the Predator. Memorable encounters in Humanity’s past some of them full of turmoil.

The burning of Rome - giant massacre of a Hunter gone rogue and put down by its own kind eventually with the help of a great Roman general.

The second World War time - encounters on the battlefield in secluded parts of the world by both the Nazi and the Allies. And a secret competition on the intelligence level between the sides to get a hold of its technology.

And in each installment, more and more lore and detail about the species should be e shown. About the worlds they hunted on and conquered and what brought them and kept them to this Tribal system.

Another one in Feudal Japan maybe?

What I’ve worked on is that you wouldn’t even know it’s a Predator movie up until you start to see elements of the Predator franchise like the OWLF.

I’m totally against any form of alliance between predators and humans.

The only one I wouldn’t readily show is the enforcer at least until the end. The poachers would be seen but they wouldn’t be immediately recognizable as Predators. The enforcer would look basically as it does in Bad Blood.

You’d be seeing things off in the distance or at night to obscure the creatures in addition to what’s going on with the character design. They aren’t supposed to be there so further changing the look is to hide them and help blend in. My idea is that certain technologies would have to be omitted like the mask since the enforcer could track them with that. So the “face” has to change for example. Keeping it Predator it would be some sort of bone mask but at face value the general audience wouldn’t start connecting the dots until it starts using its gadgets.

Presentation for me is that they look like people, albeit like demons or something. The Predator is humanoid in shape but we can’t loose the tribal look. So it’s bone armor, maybe some furs, with mounted gadgets. But things like the mask and wrist computer change to accommodate the threat of being found out. And at a glance people will freak out but aren’t going to notice that it’s a hulking alien. Like even hiding the dreadlocks, kind of like an armored hood like scales or an alien leather hide. That way if someone sees something in the distance it looks like some guy or something weird once they get a better look. It’s not perfect but I wouldn’t want to create a new creature, rather than change the theming.

Then it leads to him fighting Dutch and why he loses to him because he had a good life and he wanted it to end with Dutch, maybe he reminded him of a ancestor of his he hunt I dunno but that would be great! 😁

Oh I thought this was Disney land see all the happy people sitting down forced to be there in prison jumpsuits, HOPE THEY HAVE DIFFERENT COLORS 😁😂

The greatest sequel in history was terminator 2.

I dunno, I would maybe place aliens above it 🤔

What sold it for me was that there were legends of a certain ‘beast’ or spirit or something that kills and makes trophies of men. Follow that and make variations and the film is good to go but shouuldn’t repeat itself. Like each film should set itself in different locales, civilizations, lore based on different civilizations, and ultimately should have a strand of DNA that is consistant. Its like a retelling of the bible.
Additionally they should enlist the help of fine art/historians and practical effects .