Please add a way to play alone with bots (FT can play alone and earn XP and cash very easily).
Please stop adding skins, add REAL CONTENT to the game.
Please fix the auto-claim bug.
Please rewatch movies and rework your game !
Please do a game where the predator is the MAIN character not the Fireteam.

I hate you because i love predator !

Yeah, i was about to write the same. Urzhya has obviously not been playing for long. You need to practice playing and learn from your mistakes, you wont get anything served on a silver plate here when playing as the Predator.

Hell nah. You stand around to much with me as ft that man gonna be missing a mask

There are 5 players in the match that need to have fun. It is a shame you’re not, have you tried FT?

Dont give it encouragement. Let it figure out the hard way how to Git Gud! Lol

How long u playing this game?

You make some valid points.

Especially regarding the ability to see the predator at distance.

So distance spotting - I’m on a high end gaming machine playing in 4k screen resolution. With epic setting textures and epic setting antialiasing I can distinguish a cloaked predator who is moving so much easier when they are further away than close.

This is because the refraction shader effect used on the pred cloak at distance has a smaller range of pixels to draw from in the background in order to distort and create variance against the backdrop and so the predator always appears as a lighter or darker silhouette and sticks out like a sore thumb.

Imagine having a completely black background and dropping a single white pixel in there. If you are looking for it you will see it easily. Same can be said of the opposite.

My solution to this problem is incorporate the invisibility/fade renderer used on predators who are completely still.

For example - a predator who is 175m away or more should have the cloaked effect, but a fireteam members client should also make that predator only 25% rendered which would supplement their invisibility. This is almost completely faded out similar to when the predator stands still in cloak but stopping just short of that.

This percentage should be a gradient/curve which increases incrementally as the predator gets closer so that at 150m the predator is now +50% rendered while cloaked.

This continues down to 100m where the predator is then 100% rendered and the cloak works as it does now.

FT snipers may be able to discern movement still but it makes invisibility work at range. By zooming in with the scope it should negate the effects.

There might have to be some experimentation with distances and the fade effect to get it right though. Maybe even only fully render a cloaked predator at 75m as this is still a gulf of distance.

@Courier @OldKingHamlet - could you pass this suggestion onto QA and maybe give it some internal testing?

That way nobody with better hardware gets an advantage on spotting and you even the playing field whilst giving preds stealth ability a bit of a buff.

How the fuck you gonna say git gud when you always ran away vs me when your on pred?

Lol xD I’m just fkn with ya couldn’t resist.
Try not to get too pissed off xD 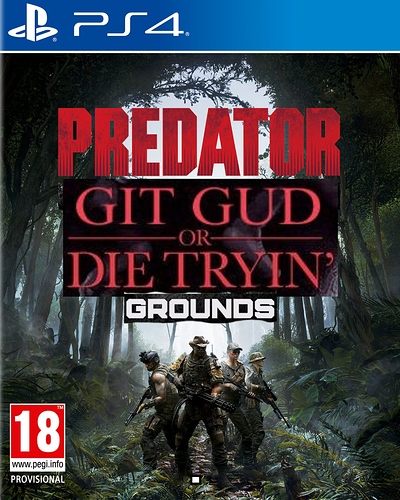 Booo. I mean its true, but that’s every game.
But this ones weak. So booooo

We shall see. XD

Nah. That is behind me. Took your advice. I tried to get in contact with yall on the game but yall nvr respond

I mean I haven’t blocked you or anything. Besides I havent been on pred hg that much lately.

I’m taking a break waiting for a pred team up mode.
Or just a new mode in general I guess.

Il play like one or two pred matches a day just to not get too rusty. That’s about it lol.

Same here. Been on a dauntless kick lately. I also changed my privacy settings since I was getting hate mail from players on the game. They just cant seem to understand that smack talking after a win is correct

Dauntless was too slow for me.
If the combat was more fast paced and over the top I think I coulda gotten into it.

I’m so sick to death of you pred boys getting on here whining. I have played as both, and the predator is OP. I down and claim the entire fire team in under 5 mins. You whiny babies need to get good. Stop whining, and expecting the devs to beef you up to the point to where you just can’t lose. You have nearly unlimited plasma caster, fire caster, nets, and arrows. There is nothing the FT has nearly unlimited except perry. And to top it all off, predator can blow up FT supplies. So predator is at a huge advantage. Just because you can’t play, doesn’t mean to get on here and whine about it and asking the devs to beef you up as pred boy. I played as both, and it is much harder for FT to down predator if the predator can play. I have played against so good predator and got killed in the first two mins. And I’m not a bad player, predator is OP if you know how to play.

Yeah its easy to play with my nephews. Monster hunter was too technical for them they kept killing me and themselves with friendly damage