Just played my first match against the Mr. Black predator...

Whoever decided that this class was ‘balanced’ should be hung, drawn, and quartered. It has an insane amount of health, a huge amount of stamina, and all at the cost of 1/2 of a ‘gear’ attribute bar. If you are going to do shit like this, you should at the very least make it availiable to everyone.

My point is, despite its shortcomings, you have made a really amazing game, and I don’t think any of your clientelle would be happy if you turned it into a pay-to-win lump of crap.

They’re gonna make u pay for his op ness

And he wasnt supposed to be balanced. If u watch the movies u will notice that he is called the Berserker Predator

If there is anymore hand holding, predator will never be able to get within 50m of FT.

Apparently for some, preds can’t even get closer than 75m to a team without being melted and hunted down.

Don’t expect any sort of “buffs” for FT anytime soon. Maybe different ways to play, sure.

He has 1580 health and Hunter stamina. Energy is similar to Hunter’s as well. He’s basically a Berserker that doesn’t suck. A Hunter class with Berserker buffs. Did I also mention he does 10% more melee damage and has 6% bullet resist?

Yeah just fucking TRY to melt it with a pistol. It won’t melt in front of a fucking MINIGUN, for fuck’s sake!

Sorry I lost track, are you saying I’m right or wrong?
Either way, the berserker in the movie was decapitated with a knife. Ain’t no way you’re surviving a knife fight with this dude.

Also in response to some of the other comments, it could very well be something to do with my skill level. I have almost a 100% success rate with Predator, but i am what most would call terrible with fireteam. I am great at making OP builds, though. I suppose it is overcompensation. Still, I could do great and terrible things with Mr. Black, and it’s very shit that he isn’t avaliable to everyone.
I suppose my main issue is that the DLCs are released so frequently, and, frankly, seem overpriced.

snorts You’re telling ME to ‘git gud’? I bet you play a lot of CoD, huh?
Frankly, I didn’t buy the game for fireteam.

I bought it to practice cranial surgery, if you take my meaning.
Besides, the 10112 only melts things if they stay still. Try hitting Mr. Black as he hops around like a little bitch killing all of your teammates. 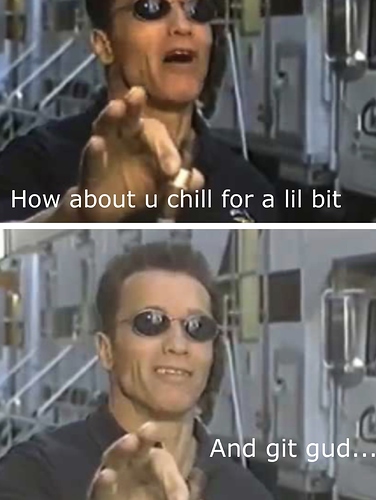