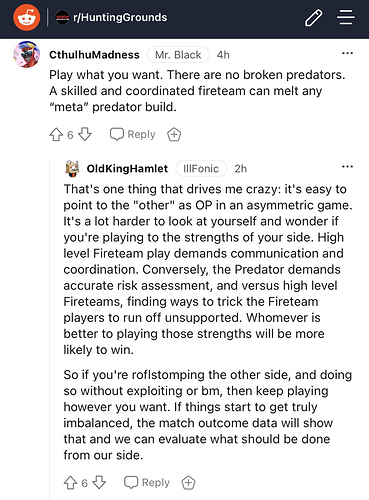 how do we feel about this one boys?

He isn’t wrong in my opinion.

Come the fuck on. It’s simple math. One FT can out DPS the pred. Now multiply by 4. Not to mention EVERY element of this game wipes the FTs ass.

Git gud and show us your trophy count loser!

What the devs don’t seem to understand is, in every piece of predator lore, the predator has always been op, they just kiss the FTs ass

but that’s not the point here

Same as usual, anyone who thinks game is so balanced just need to play as predator vs no potatos, but they won’t do it cus they know whats gonna happen. Its easy to say that when you hide behind only playing as fireteam since its much easier.

The bulk of the player base is and always will be casual gamers though so…let’s face it they’ve catered the game to that. Can’t really blame them for that in the end.

Only thing I will call bullshit on is “tricking the FT to run off unsupported”. There really isn’t anything in game to effectively do that for the pred. No real way to separate a coordinated and familiar fireteam. Just gotta burn them down faster than they can run the mission.

JH lost due to underestimating Dutch’s brain, CH lost to cockiness, Falconer died somewhat honorably, Tracker died to underestimating the Russian and dying to a lot of ‘nades, Mr Black died to exhaustion from repeated beatings and Isabelle shooting him for a distraction, Fugitive had no chance against Upgrade because of his size, Upgrade lost due to underestimating what the soldier, scientist, and autistic child, but that ain’t my point, just look at how many each one killed before their demise, not entirely sure on Falconer and Tracker’s kills though

I was gonna say that. Like how do they expect that to happen when there’s literally no way to separate them. There’s no weapon/gear in the preds kit to do that nor is there a mission that requires teamwork and to separate. The only time a FT will do so is if they’re potatoes or they don’t consider the pred a threat.

This is a casual game, not a competitive one, so anyone who gets their panties in a bunch over this and that balance issues needs to go play an actual competitive game, but they won’t because they don’t want to find out how much of potatoes they really are at playing competitive games.

There is nothing special about playing as the predator and calling it “skill” oh boo hoo welcome to actual aiming with projectile type weapons, now go and implement your skills where it matters, because in this game it does not.

A skilled fireteam? It doesn’t take any skill at all to grab a meta weapon, aim, and shoot. Keep in mind there’s four of these people against one underpowered player, so four of them blasting with OP meta weapons and perks, the only logical outcome is that the predator gets melted; it’s nothing short of a miracle when a predator wins against a team that isn’t full of squeakers or people who seem to have never played a 1st person shooter in their life.

Today’s just the day that keeps on giving lol.

The match outcome data is also not a great measurement of balance when there is the hidden factors that are not considered in these matches that would skewer the actual results. For example, it turns out by one of the devs here, I don’t remember exactly who said it, but that if a Predator manages to succeed in self-detonation, that’s considered a win for the Predator. No one, not even myself knew that was the true case and thought it was considered a draw. The Predator kept its honor but FIreteam gets no body however the remaining ones survive. So this means that many Fireteam players had always gone with false wins the entire time. How can that count as a win if no one knew? Or how about the fact that so many players do not know about the parrying system that allows players to block incoming melee attacks? It never fails to amuse me when Predator and even Fireteam players see me block incoming melee, and I always witness a Fireteam back up firing on a Predator that is doing melee clean up, completely unaware that they could have blocked those attacks and saving their skins. There are so many hidden rules and abilities that so many regular FIreteam members never seen before and its always an interesting experience to show them how. Once players truly know the game, the wins always tend to favor Fireteam, as the current power scaling all falls for them.

There is also the notion of Predator demanding risk assessment versus high level Fireteams. That would be fine if the Predator wouldn’t be so limited in options that allow proper risk assessment due to so many punishing factors that would keep the Predator on the low end of the power scaling. Sniper rifles that can blow off a mask in 2 to 3 shots, pistols that can decrease health in seconds, spotting ability that can allow a lengthy time to track a Predator that is searching for a pig for health but can’t as the vision mode is now inaccessible cuz FIreteam had destroyed it moments ago, or how about that melee isn’t viable due to the incredibly high DPS of the collective Fireteam that can destroy a Predator in seconds? Illfonic made the power of Fireteam increase for a proper 1v1 fight but then forget that there are 4 Fireteam members with each of the power of 1v1, then the odds of the sole Predator wining the outcome will be down to nothing. Especially that with many melee weapons that incentives the Predator for mostly melee options but that would be tactically suicide thanks to the insane Damage Per Second that each Fireteam member has, who by the way, each have the ability to block any incoming melee attacks. So knowing the accurate risk assessment of fighting a more powerful force, there is no way a Predator can get around this with a able Fireteam that is always on guard. There needs to be more options like more Predator gear or long range weapons that would allow the Predator to properly compete with this.

In the end, the match outcome data can show a portion of the balance for sure, but having it the sole source to make balance changes is not the proper way to analyze this, as it makes things too narrow sighted to see the bigger picture of the gameplay. Whomever is better to play those strengths will be more likely to win? Well, with the current power balance, that will always be to Fireteam, after all thats the system Illfonic made when they made it possible that each Fireteam can have a proper 1v1 battle with a Predator, forgetting that with that collective power, the Predator has no chance at all.

There really isn’t anything in game to effectively do that for the pred. No real way to separate a coordinated and familiar fireteam.

Exactly. Good teams, that aren’t being cocky, aren’t going to split up. There is no incentive or advantage to do so.

how do we feel about this one boys?

Even if OKH were right, there are balance issues within each side. War club, Katana, and Plasma Pistol need a buff. The Axe needs a nerf, and the Bow a small nerf, IMO. THE SAWZ50 is clearly the best sniper and probably the best weapon and needs a nerf. FIELD MEDIC is needs a nerf. Half of fireteams weapons are useless, (e.g. OWLF RIFLE).

You can’t you mass data for every balance decision, because players will make ego choices when something is too strong. You just need common sense about how a try hard coordinated team will use something.

The Fireteam’s objective is to survive…so if the predator detonates themselves, it would technically be a draw. The predator KepT iTs HoNoR and the Fireteam survived. But are we really going to act like the game respects predator lore when there’s multiple dead predators alive and well in the game that takes place in 2025, along with two versions of Dutch, AND Alpha predator, a prehistoric yautja who is basically the Moses of yautja society…yet we’re able to play as this living fossil? You can’t have your cake and eat it, too. The yautja loses as soon as they get downed. The devs can make claims otherwise when this game isn’t a buggy, crashy mess.

Seriously do they even play their own game? Watching their streams I would guess not. It’s like watching a bunch of Fortnight babies play this for the first time.

Play what?
The fact that their starting weapons (which they use) don’t even have extended magz, tells you how much they play PHG. 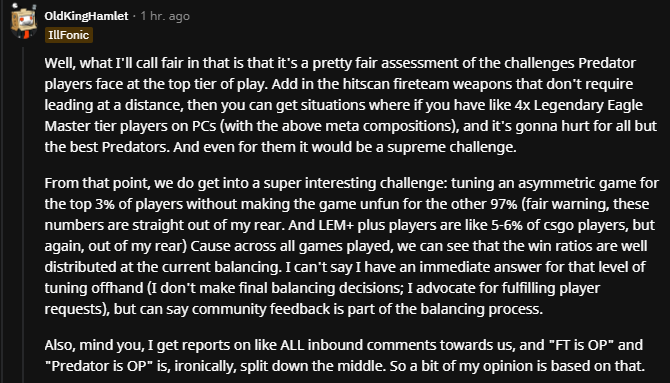