The problem, as always, is the way people express themselves in absolutes.

“A skilled and coordinated fireteam can melt ANY “meta” predator build.”

Whenever I read people saying “you can melt ANY pred” “You can 1v1 ANY pred” … I stop taking them seriously, because they do not understand what it is to play with people at different levels of skill and therefore, they don’t know what the hell they are talking about.

This game will never be balanced and there will always be people complaining about it, because the skill gap between players is too great. That’s why they introduced modifiers for private matches, so the Top Tier can balance the game themselves, but to this date I have not seen Thunder, Samhein, Gessp, Beer, Dan, etc. play against each other using them.

but don’t you think bad things that have been bad for over a year should be brought to be simaler to things that are good for gameplay variety sake? or the best things to be brought down

or is that ok?
i don’t care about making mediocre predators able to challenge the top 3% i want mroe player variety i don’t want to feel punished for using bad weapons perks or classes

Too many weapons being not spectacular. This is on them. and really a matter of taste.

the variety play right now is pretty bad, and that is in big part because of the constant request of balancing. Damage is so high right now that you are forced to pick specific classes/weapons on both sides when facing players at the same skill level.

Here are some ideas for people who complain about balancing, yet play mostly private matches:

You can also limit the amount of perma medkits and ammo crates
There’s literally a ton of shit you can do to balance it among people on the same skill level. But nobody does it because the minute someone changes anything everyone yells “unfair”… then if it is unfair, how come you complain the game isn’t balanced?

With those changes youd have to make the mission harder.
If you’re raising ft health, then you definitely cant afford to lower a.i. damage.

Like the mission shouldnt be easy for the ft, after all, that’s their main objective.

Aside from that tho, if implemented properly I can see these changes actually working really well.

I posted two sets, they’re meant to deal with the corncerns you mention (higher interaction and mission timers = longer missions) and to be used one or the other, not both at the same time. Sorry if it wasn’t obvious

And this is strictly talking about people in private matches at the same skill level.

Dan, Thunder, Samhein, Beer, Blade, etc. rarely have a hard time beating me, chopra, vex, shaymin and the american PCDS discord where most people are not at the same level of gameplay as they are

If I could only have two changes per side, I would:
Fireteam

If they want the OWLF Rifle and War Club to collect dust for the rest of the game’s life, go ahead, but at least shake up the META one last time. 🙄

IMO the field medic problem is the health (specifically when other team players are using dutch25, dante and support) not the time. Revive should be a fixed amount of HP, not a percentage of the class HP. If you triple the time is basically the same as a regular revive with dexterous. Pointless.

Basically almost everything that is broken regarding damage, health, spotting, etc, with this game is because is percentage based (multiplier) instead of a fixed amount (addition).

Come the fuck on. It’s simple math. One FT can out DPS the pred. Now multiply by 4. Not to mention EVERY element of this game wipes the FTs ass.

OHOHOHO but if we account for 0 communication and half the FT looking at the ground simply beHOLD the data.

Devs only care about potato pubs because tbh this isnt a competitive game. Its shitty and lazy and there’s a million things they could do to atleast level the skill floor or add some QoL changes for pred to atleast pretend they play both sides but if they haven’t done it yet its never happening.

'Cause it’s not like everyone can pick up the SAWZ and be good with it.

It has a slow bullet reload time and not to mention that you can fire 3-4 shots before you reach the Pred on the branch, 'cause, invisible branches that are literally shields for Pred.

As soon as you start sniping, boom, an AI with a shotgun spawns behind you and melt your health away.

When that shit is fixed, we can talk about damage nerfs.

IT COULD ALWAYS BE WORSE LUL 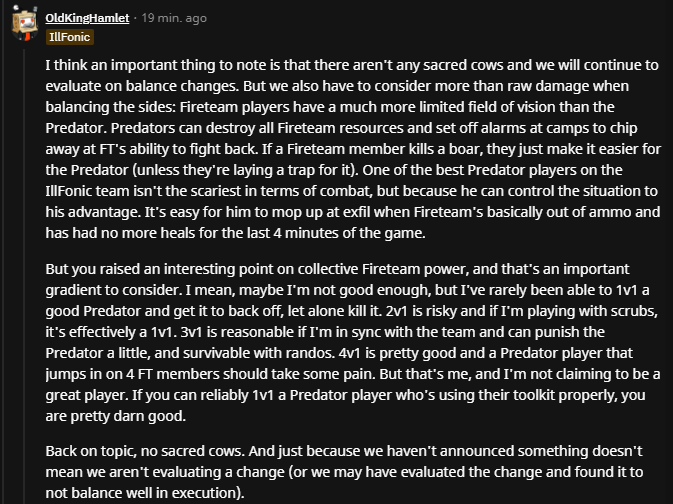 Hard disagree, there is ample evidence that they get predated by either circumstance or Rich ass crazy people who want to use their blood to live forever, comic book and concrete jungle

Predator cant check all possible resources and destroy them in time when he has to worry about FT finishing missions in 3 minutes, no time , FT can always bring more resources anyway. They dont know how things actually work in practice.

Is he soloing all the AI on the map? How do you run out of ammo?
Maybe he meant gear/syringes?

Moreover, hilarious that they don’t consider collective firepower at all. This is literally a 1v1, 2v1 game to the devs. Safe to day we’re not getting 2v6 or 2v8 and their original oopsie post was their genuine stance on the matter.

I get it, the game is broken at “high level” … but that high level is literally a handful of players. Why rebalance the game so is balanced for the top 1% and ruin it for the rest 99% of the player base?

On top of that most of these players play mostly private matches they can modify.

Imagine just how boring it would be for them to play pubs if they buff pred. They rarely lose a match. 99% of their matches are easy as hell. Imagine with a Pred buff. So what, rebalance the game so you can have an easier game against the 1 or 2 PC death squads you encounter once a week?

Pubs balance is fine as it is right now. Terribly balance because of the high damage, but balanced nonetheless. If anything my only complain is the high damage. And that pretty much started when specializations for FT were introduced. From then on it has been a nightmare. But why did we get there? Because people wouldn’t complain, ON BOTH SIDES, that the game needed balance.

I thought that by now most of you would have learned the lesson, which is llfonic have no idea on how to balance a game properly, but you keep insisting and as long as they keep hearing it they’ll go ahead and change something and break it.