I think you guys improved the drop rates from Weapon Crates a little bit too much.
Not that I am grateful for it, I am very happy to finally get all mythical Predator Trophies, afterr playing for nearly a whole year while only having got the Bobcat skull.
I spent the day opening nearly 2k crates and already got all skulls and 6 mythical Trophies, while my Veritanium Bank account grew by a over a million V.
Many people seem to get similar results.

I think that it is nice to be able to finally get this stuff way easier and I will keep abusing this tomorrow, but these rates are clearly too high.
What’s the point of having Mythical Trophies then, if I can grind them so easily and also earn so much Veritanium by opening them? 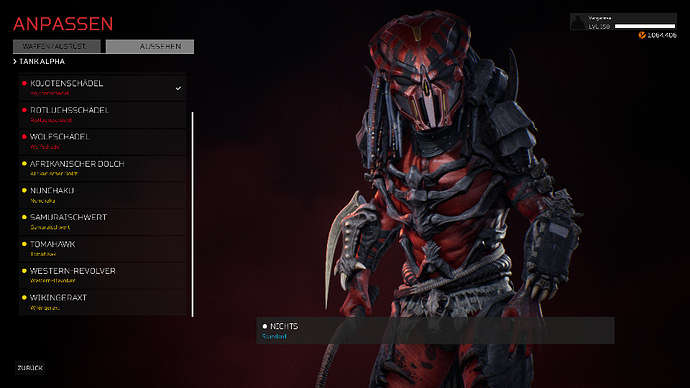 Just a little idea as a Solution:
Introduce some new mythical trophies and items in upcoming patches, so we can keep the current ones, but tie this new stuff to real ingame achievements.
Like a mythical Trophy you can only get by claiming 1000 Fireteam players or something similar, or a special FT Knife/Helmet/Gun/Shader you get after dealing 1 million damage to Predators.
This would certainly get some people to play more.

Shut up narc! Can’t you wait till I at least get one cool pred trophy and not a knife skin!!!
😁🤣

What’s the point of having Mythical Trophies then, if I can grind them so easily and also earn so much Veritanium by opening them?

Even though they finally made the mythical ones a lot easier to get, seriously, I must have opened easily over a million field lockers by now since launch, And I still haven’t got any of the human skulls. The one I want the most is the one with the spine. Has anyone got any of those? Are they even in the game? Really starting to doubt it.

So we went from Impossible, Once in a Lifetime Opportunity to Not so Rare.

I doubt these rates will stay for long, but these rates aren’t bad, just shortens the artificial grind, and these increased rates for Mysticals/Exotic Trophies are only so high for Veteran Players who have already gotten a lot of the common items out of the Field Locker Drop Pool. So I actually doubt someone who started the game say today would get a Samurai Sword or Flintlock Pistol on their first day.

SILENCE!! Don’t tell them to change it until I get the revolver and flintlock, damn you!!

Just got the war hammer, which was the last one of the mythical trophys that I didn’t have. Have them all now, and all the animal skulls, but still none of the two human skulls that is supposed to be in the game. The one with the spine has always been the one I’ve wanted the most. Wtf is going on??? Are those two skulls console exclusives or something?

Edit: Nevermind, just found out they are not in the game yet (and probably never will be). Sigh, such bs.

I just got my first trophy ever. Wolf skull.

I just got the western revolver.

Got 10 out of 11 now, except for the Flintlock after opening 3000.
Even JH mask lol.
A week ago I wouldn’t even have gotten one trophy. 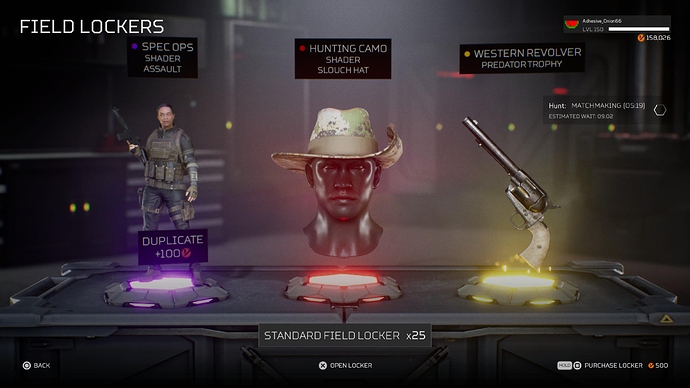 Got that sweet baby on Tuesday

I hate you all.

So Im pretty sure I have found the sweet spot.

I buy 20 lockers at a time. Open them and then play a round of ft and repeat and after the round of ft I end up getting a mythical of some sort. Mostly Knife shadders and stuff. Also of you dont own alot of the customization items then ur lockers are going to try to finish out your other stuff first

I noticed that. The only thing I never really got into was pred weapon skins. I’ve gotten a truckload since the update.

I’m probably gonna have to try your method anyway seeing as how I’m pretty much out of VT at this point lol. Unlike @GetToLaChappa I didn’t hoard it all