they need to punish braindead preds, not reward them (rant from a fireteam member who wants to have other strats than camping)

I just played a game as fireteam where with randoms (so you all know how that goes) and we went up against a scout pred so I thought “oh he is gonna stay at range and snipe at us, so dont get to close” BUT NOPE he just ran in with a katana like some sort of Idiot and proseded to kill us one by one, WE WERE ALL SHOOTING AT HIM AND HE STILL SURVIVED AND GOT A QUICK CLAIM!

I know that the normal thing here is that predetor needs to be buffed and that fireteam has it easy, but when a scout can survive 4 fireteam members shooting at him that is where I have an issue, if a pred dumbrushes a fireteam they should just get erased (dont @ me pred mains because I know you will hate this) they would have to need to be smart, even the berserker should not be able to get a claim from playing like a moron, the fireteam only have their numbers but right now that does not mean SHIT, because the pred just dont die and we cant punish him from being stupid, and he gets rewarded for this shit with a free claim that we can do nothing about.

I have seen all you pred main complain about fireteam useing cheap tactics like camping but as someone who plays fireteam mostly I can safely say that it is our only option if we want to take down a pred, WE NEED TO CHEESE because otherwise we just cant kill you unless you truely fuck up.

and I know that if you just reduce the preds health then it will be to easy I get that, but a scout should not be able to survive a full fireteam shooting at him and still get a claim, because then we basicly have to camp to do anything (as I have said)

and I have even played as a scout pred myself (because imo anyone that uses the high health preds dont know how to survive without it) and even I feel dirty with how easy it is to get claims, one time I had a guy blasting me in the back with a shotgun from behind when I was at about half health, AND I STILL GOT AWAY WITH IT!

I dont know what can be done, because if they nerf the preds health then the pred mains will start to complain, and if they do nothing then us fireteam members have to camp whenever the pred shows up otherwise we die and then they complain about that, its a lose-lose

and before I end this please know that I am quite heated right now because of the match I was just in, because I do not think it is fun that I have to cheese the pred in order to get a chance at scareing the pred away (but most likely just annoying him into leaving us alone) and I do understand how annoying it must be for you pred mains who have to deal with it but there is a reason not many people play FT, because we depend so much on our random teammates and if you get stuck with a bad team then you have already lost.

normaly I would try to make a list about how it could be made better but I have no idea, because as said if you nerf the pred then the camping is gonna become stronger and the pred players will complain, but if you buff the pred to combat the camping cheese then the FT will just become more unfun to play so as said they are at a lose-lose here with no chance of winning because of the choises they have made in the past with this game, and it just makes me so sad.

if you made it this far thanks for reading, I know that you may disagree with me but please try to keep it civil if you want to comment because I dont want to argue, I just want to have my voice heard about a game that I love and hate at the same time, but if you want to comment then I will do my best to also talk when I have cooled off more

Tbh it’s this new increased armour which lets them not get second winded as easily. So Beserkers are now op just because of this fact.

Maybe the scout had iron sides? Are you certain ur randos were all shooting aswell? If so, how do you know they just didnt have potatoe aim? Did you or the pred have high ping? Without a vid it’s hard to judge

Last night we second winded almost every pred pretty easily, it varies who is on your team and there loadout I think

Don’t even need Miss Cleo the psychic to tell me which way this thread is gonna go.

Honestly if a scout pred pulled that off that’s amazing even if all three other FT members were running the XP boost perk.

If 3 of you can’t 2nd wind a scout who’s claiming then you all fucked up, trust me I know I main scout. The scout even with the armor buff is still squishy as all hell. Shotguns really aren’t meant for damaging the pred so don’t be shocked that a potato can run up behind you, shoot you and you’ve barely lost health.

Camping or cheesing is sure as shit not required I have no idea where you got that idea since any decent pred can flush you out with the plasma caster and even then they can run out the clock and win.

Berserker overpowered? Did they make them good just now because I can still melt them damn near solo the majority of the time.

To wrap it up OP you have to get better and play with some decent squads not random potatoes. Ask anyone here on the forums and they’ll be willing to help, there are some amazing FT mains & hybrids that can melt a pred in the first minute of the match and do not ever rely on camping.

Secondly. Are you using Specifications for your class? What gun were you using? How far off were the other 2 members? Are you sure they were shooting at the Pred and not ai? Because if you were all dumping rounds into the Pred then this should have happened 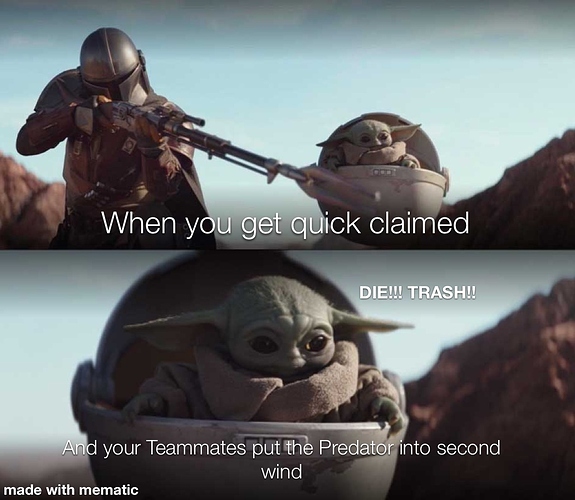 So im not really understanding your Gripe?
As a random Ft your odds of winning is pretty slim against a decent Pred. So with that being said you lost what 1 match? Boooo hooooo! Cry us a river!

Either Get a team or nut up and shut up

Cause this game is 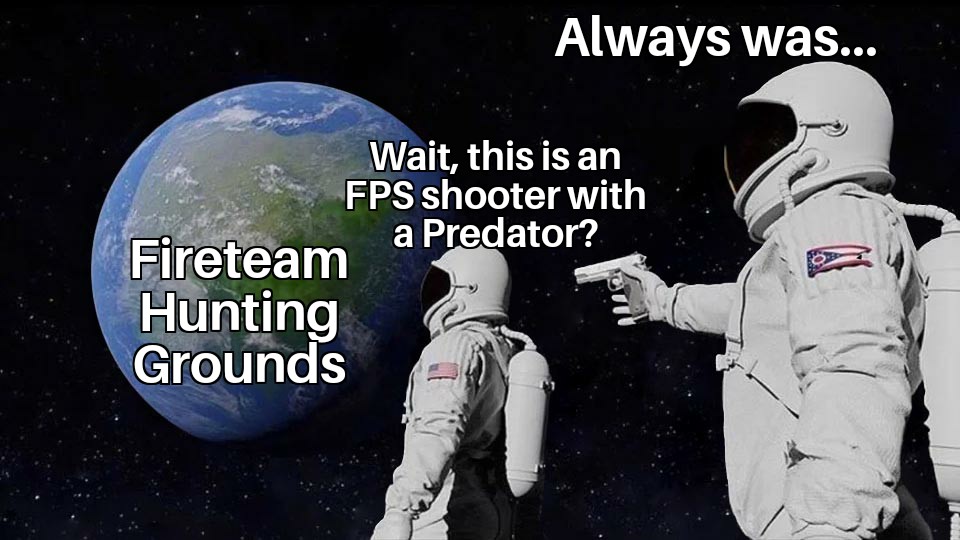 @GothamsPredator @REYNOSO_FUA11
Was this you, you Dirty Dirty Little Scout Mains you. “Fucking Disgusting” you little rascals you guys

If a Fireteam got claimed by a scout Pred running in using melee, that Fireteam was very, very bad.

If I try that shit using Elder (the only class I currently use) I will get melted if 3 FT are shooting and hitting me.

Don’t think so especially if the scout was using the katana however this same scenario did happen like 4 times yesterday where there anywhere from 3-4 support FM or overseer who would consistently camp so I would spend the match raining down plasma. When it was the last two I’d run in melee then teabag and pick em up and set them down repeatedly until they bled out to waste their time like they wasted mine, then let them know that camping guarantees your death especially since I had already fought two of the guys a match or two ago and they did the same thing there.

Yup. Happened to me yesterday. 4 FT unloading entire clip on a Berserker. 2 of them were Assault/Deadly/Yautja Bane and the Berserker meleed 1 FT down, claimed and jumped out w/o even getting in 2nd wind. This kind of engagement shouldn’t even be possible without getting the Predator to 2nd wind at least. This should be some kind of last effort strategy for any Predator.
On the other hand i still stanf for more options for the Predator to attack. More Primary/secondary weapons.
1 extra slot should be available for everyone, Traps for the Predator and a 3rd weapon (pistol/revolver only) for the FT should be granted w/o taking any slots on the arsenal.

Dying to melee scout is a punishment for braindead FT

I wish I had a recording trust me I do, and yes I did state that things are just wrong with playing with randoms in FT, because they do what most randoms do in a team game and just do their own thing because they want to have THEIR fun, and I was not really looking at the rest of the fireteam when we were shooting at the scount I just heard all of the gunshots and there was no AI there but I saw the pred become more and more bloody, but yeah as I did say I do understand that it might just have been a 1 time thing I was just super heated and angry that it happend, because I had just had an awsome game where I got absolutely DESTROYED by an alpha pred, he was jumping all around and fourcing us to retreat and get closer when he did mellee, but then he would jump back and plasma cast us IT WAS SO COOL, and then having that happen kind of just pissed me off because I just went from an amasing pred to a braindead one who just spam the katana so that might have hade something to do with it

Maybe they shoot but missed all shots. Yesterday I got a match with 0 damage from the FT, I was using the Samurai so it shouldnt be hard to hit me yet the bullets and grenades didnt touch me.

Balance is in FT favor, you all just need to learn how to aim.

But on a serious note Fireteam has insane dps compared to Predator, I think matchmaking just cursed you with 3 new players/potatoes. It sucks, because when the Predator is fighting they seem to either run away or magically upped their sensitivity to the max.

yeah I dont was useing Dante with unleashed and the RPG with an Z-06 and was just blasting away at him, but yeah most likely just me not seeing that my FT was just faffing about