I may not be the first to suggest this but, It would be really awesome if you guys added Wolf, the predator from AVP ( requiem for reference) into hunting grounds.

For newer fans, wolf is a predator with acidic burns on the left side of his face, a missing tusk, and a messed up eye due to a battle with a xenomorph (alien)

It would be SO AWESOME! Not only does he look super cool, but the gadgets he uses in the movie alone, would make awesome new weapons!!!

Like when he gets a plasma caster on each shoulder! That could be part of his base kit!

Or later when he makes that sawed off, plasma caster shotgun thing! That would be a sick weapon, it would be like the hand held plasma caster, but less effective range and higher damage.

And finally, the xenomorph tail whip! It could maybe have an ability to trip survivors and rope them to you, im not to sure.

Aside from some weapon skins like an AVP shuriken for the smart disc, maybe the laser trip mines in the sewer fight, actual trip mines, thats my thoughts for weapons!

For stats, id say he would be like the elder class, except maybe more stamina and health if hes in his prime.

Ideally, it would be cool if he was base game, unlocked at level…125-150? He aint no slouch so it would make sence to earn a predator of his reputation. At the very least, make him a paid Dlc. Please dont just put his mask in the game like Mr black, that was just wrong when i saw that but no actual predator…Anyway! Those are my thoughts!

We have been asking for movie predators since launch. But instead we have count them, 4 predators, pretending to be humans

Wasn’t city hunter the last movie pred? Over a year ago?

Hahahahahahahahahaha most we’ll get is the mask. Take your Tiki and Cowboy pred cause that’s all we’re gonna get.

Four if you count Mr.Black’s mask.

No idea why they didn’t do Fugitive at the very least or made him a level up reward. It’s understandable the 2010 classic might be an issue but that would’ve been three of the four films getting a rep if the supers had been taking more time than anticipated.

Four if you count Mr.Black’s mask

I don’t count it

5 if you count falconers mask on Isabelles back lol

Wait, is that really falconer’s mask!? NO, hes one of my favorites!

You would love that to be true wouldn’t you 😄

I get they want the predator avengers to all have some pred stuff strapped on them, but yeah it definitely only happened because Royce is getting Mr Black’s mask on his shoulder or back or something.

I hope they add the wolf predator. That’s my favorite. He looks amazing and he’s an elite class pred. I really don’t know why they wouldn’t add him. And to be honest I really don’t like these Egyptian and Viking themed preds lol. I rather have original preds for the game that actually look decent or play as the OGs from the movies like scar, Wolf, and Mr Black. They should also remove that pre order bonus JH so he can be available to everyone

They have leaked scars mask but it is renamed

There is a mask that gives off a wolf vibe

Don’t mention the JH thing, it sends a lot of people into a feral and very toxic frenzy

Because it’s something that’s been answered by the devs before and stated several times and that’s just never a good enough answer to some people (not saying you just in general). It’s weird because we usually don’t get answers for anything so when we do it’s usually set in stone. 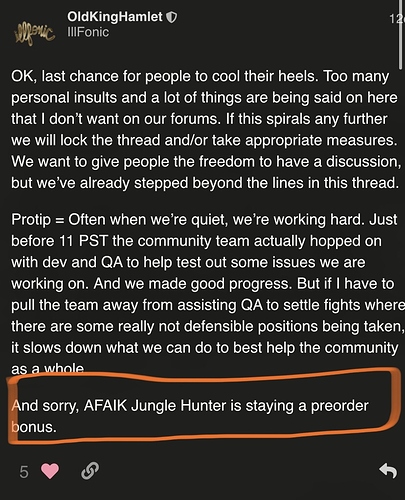 I don’t count the mask either. Mr Black is a completely different breed then the rest of the Predators. They didn’t do it any justice at all just releasing just the mask…

you don’t deserve him