Please Stop The Paid Updates! Make a season pass if you have to

If you want to charge for updates, then create a season pass at a reasonable price. I’d do that but no way I can justify paying $5 per paid update ongoing.

You might have some short term victories, but overall this “paid update” thing is hurting your bottom line.

It’s getting to the point where the game is becoming a micro transaction based game if this keeps up.

Think about how the news of micro transactions killed the launch of star wars battlefront 2… it took a long time for them to recover from that and it hurt their pocketbook.

No one likes micro transactions or paid updates. There might be a few who do, but it hurts you and prevents you from making the big bucks Illfonic.

A lot of people buy games because of word of mouth and reviews… right now the word of mouth about your game is that “it’s fun and has its positives, but there’s only 3 maps, 1 mode AND on top of that, it’s very buggy, and every other update is paid, and no one knows when paid updates will stop.”

Not the best look there for you Illfonic, perhaps not the worst, but definitely not making people rush to buy the game.

You need to eliminate the negatives and get everyone raving about this game, then people will salivate over the chance for a season pass or DLC, instead of the meager few bucks you’re earning from the ultra fan boys.

Nothing against you if you’re a buyer of the paid updates, for those who love the game it makes sense. I’m saying it’s just a bit overpriced.

And Illfonic, I love the positives of this game and want you to be successful. Follow the blueprint of other successful games with paid DLC like the Witcher where people beg for it, instead of forcing micro transactions to get a quick buck prematurely.

The season pass is terrible… paying for maps is terrible… I mean the game has so many bugs its like saying it ok to keep giving your druggy friend money.

They are all optional though.

And a season pass, by its definition is you paying a slightly less ‘bulk price’ for a ‘bundle’ of paid-DLCs.
You can’t have a season pass, without the content itself being monetized individually as well.

I’m not a massive fan of the current content of the PAID updates, but I’m fine with the method.

They need a revenue stream of some kind, and so for all the paid content does not split the player base, or actively detract from the game experience.

If the content included maps, perks or game-modes, I would have a serious issue.
But I’m not really upset with how it is so far.

They need to keep themselves afloat until they can wait out the stupid exclusive deal with Epic, and make it to STEAM.

paying for maps is terrible…
but make the maps free

They have already confirmed that all maps and game modes will be part of Free updates only.

well ill see it when i believe it… they said a lot of things.

You mean, you’ll believe it when you see it? :P

Season passes have been dead for years in the gaming industry because players didn’t like the fact content, maps and game modes were locked behind a pay-wall.

Micro transactions have become the winner for constant revenue that’s optional to gamers that have the disposable income to spend, whilst allowing players to opt-out and not buy content if they so choose. All without dividing the game’s community because of paid maps etc.

I personally think @IllFonic is doing it smart, by providing on-going updates with free content + paid content. You can’t say it’s pay to win because weapons from paid DLCs are dropped for free the following month.

They’ve tweeted maps + modes will be free content as well as in forums. 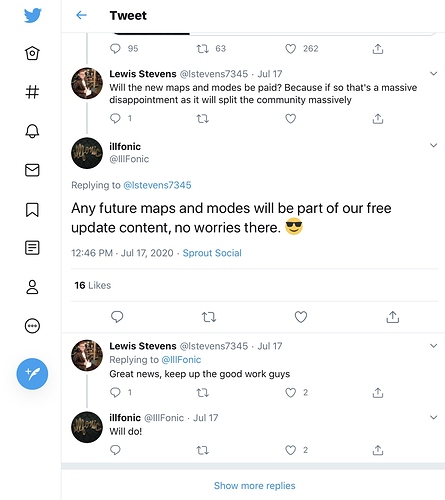 love how they put 1 percent into the ai.

no season pass, all the online games have this now…im pissed about it…i pay to get what? some skins and some ingame currency faster? and some unique things…fk them…the game tbh dosent have the necesary to get a pass…trust me.
when the game will be classified as a 90% on metacritic in the future and they will change or add more mechanics…probably after that is good to add a season pass.
and second…a season pass is related to an event…there is no event unless they will add @Papa_Applepie ideea Welp the HUNT Expansion DLC this late July. Concept.

Think about how the news of micro transactions killed the launch of star wars battlefront 2… it took a long time for them to recover from that and it hurt their pocketbook.

Not the news of microtransactions killed it. It was the paid gambling mechanic of the looboxes wich were full of perks with different rarities and were therefore labeled as Pay to Win. The whole “progression” system was based around lootboxes. The lootboxes in PHG and the paid DLC we have is completely different to that. Mostly cosmetic or early access. I’m okay with that.

The updates ARE free. The DLC is paid and even half of that is early access. You get part of every DLC for free later. But the updates are always free.

The last thing I would like to see is a season pass, it forces you to play almost every day and in the end everyone has the same as you, if you don’t want to pay € 5 don’t pay, more exclusivity for the rest of the players. if we are willing to pay, or that € 5 was crazy … Also every month they add free weapons and accessories so you don’t cry and still …

They are Macro transactions tho. You are not spending money on filed lockers to try to get ahead of the curve. Its just playing for a new playable character tho

What is the difference? Your still paying for content just at different times.

Unless there’s a discussion somewhere that I have not been a part of or even heard about, core game experiences (Maps/Modes) are planned to be part of the free content packs. Weapons may be timed early accesses with associated DLC characters (ie Hammerhead with Dutch, Wrist Launchers with City Hunter), but have either been released in free updates or coming soon (Wrist Launchers are planned to be available to all in September). Key cosmetics/classes can be DLC/Preorder locked, but these aren’t designed to affect meta.

Of course, I can’t be clairvoyant to any potential future changes, but from all that I can recall passing by me, the above is what the plan is.

Why have a season pass when they can get money per month for each skin?

I like the way it is and since there relatively inexpensive even if predators dont interest me as much I can still grab them for the price of a happy meal, and so far playing your game has definitely been better then anything I’ve ever had at McDonald’s just waiting for some maps