@Courier It would be awesome to have a Trophy Room 🏆 for your Predator and a separate one as the FT.

An example of this concept is from that OG NFL 2k5’s THE CRIB, that had a full house you could customize in first person which had interactive experiences like mini-games and a full Trophy Room!

To this day that was me and friend’s favorite NFL game of all time!

Skip to 1:54sec to jump to Trophy Room part.

In addition, the trophies would be pulled away from Field Lockers and could be earned from claims in matches versus both FT and Ai.

Trophy tiers would be established and mythical trophies could be attained from milestones in-game, like winning 100 matches as a Predator or 25 Stealth Kills for instance.

I would gladly accept this than level grind… maybe keep the level grind and also have an ability to unlock classes with trophies i guess?

Fuck luck, I want this

Nah, I think those types of things should stay as is. The idea is to unlock the actual trophies you can currently find in silly Field Lockers supposedly… ain’t seen a one in over two months.

It would be more in the spirit of hunting to have to earn them from playing and killing rather than a random drop from a Field Locker.

the only trophy that u get for now is just human skulls, nothing else…cuz a trophy room is based on what u’v hunted down.
good ideea tho.

You’re missing the point. Yes all we get now are human skulls — my suggestion is that either random claims drop a trophy during the match, as if it were on that claims person or after completing a milestone a certain trophy could be earned.

And then milestones could also be used to earn trophies just for customization of your trophy room that aren’t trophies you’d carry on the Predator.

For instance, let’s say you’ve eaten 100 piggies, there could be a boars skull hanging on your trophy wall.

Another idea is you kill Dutch 500 times and reclaim his Shoulder armor Bio-Mask and Wrist Computer to display on your trophy wall.

Let’s say you prevented Fire Team from reinforcing 25 times, you get a blood covered reinforcement transceiver to display on your trophy wall.

The Trophy Wall could have sections, 1 section for weapons display, another for actual carry-able trophies like the Exotic & Mythical ones currently in Field Lockers and a third section with situational milestone achievements like the Boar Skull mentioned above.

The space should be interactive allowing the Host Predator to invite friends into their ship to give them a tour in First Person, with the ability to zoom in on objects and rotate them displaying information about the object and how it was obtained. A way to brag and showcase your Predator hunt efforts over time.

Similar to the Crib, the Space Ship’s interior design should be customizable allowing the owner to place some favored trophies on pillared displays, change the ambient lighting colors, add smoke, change the wall, floor and ceiling designs.

I think this has so much potential!

Here’s some Trophy Wall panels from NECA toys as examples: 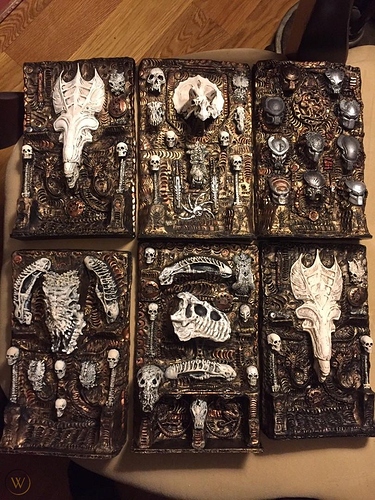 I’m a fan of this idea. I made a similar post and am quite happy to see others want something similar. My set up was a bit different but some variation of either would make me happy.

Not sure what the rules on double posting are or the character limit on edits but I have more to write now that I have time. I apologize if doing so is against the rules. Earning Mythic’s - Getting the mythic trophy’s from crates is ok but I’d like to suggest another way to do this. Each month or there about’s, we’ll have a challenge we can complete as our Predators. These challenges can vary each month, the first month might be something easy like find three Key’s to unlock a cloaked box left …

Hope you don’t mind me linking mine.

I would be happy if a realtime version of the NECA Toys trophy walls were included and were unlockable by spending V. It would be like the diarama in the main menu…fading in and out zoomed in…
I think as time goes on more and more could be downloaded as a DCLs.

Trophy Rooms would be awesome as a mode similar to their Virtual Cabin in F13th. Walk around as either Pred or FT and browse your collections as each respectively. Throw in cool trivia and easter egg set pieces for us like the Audio Tapes we have now.

I’d be happy for alternative ways than luck to get the Trophies, lol. I haven’t seen a Mythic box in soooo long. RNG HATES me.

Ditto, I’ve been playing since beginning and barely have any mythical items and only two trophies. 🏆

Right? Lol. I go to look in the Mythic Items and Trophies thread just to see all the cool shit I will never unlock because I am legit hexed. I just want the Samurai Sword trophy and the Human Skull/Spine Trophies. After that I’ll be cool with the gambling and seeing what happens, lmao. I love collecting cool things so I’ll keep getting boxes even after I’ve gotten the stuff I plan to actually equip just so I can have a collection and when we get more loadouts I’ll play around with different themes and character concepts.